...trying to put events into an astrological context

What we just have been witnessing could be translated, astrologically, to a reactivation of the Saturn Pluto conjunction of 2020: invoking the complete overhaul of traditional structures, political systems, institutions, tearing away everything that has become excessive in society. This is a significant phase of collective rebirth. Obviously, we are not done with it yet. In this reactivation of 22° Capricorn, Venus and Mars were aspecting Neptune. This adds a dissolving quality. The resolute restructuring of Pluto in Capricorn is being 'supported' by an energy of disintegration.
Fossil based energies, oil and gas, but also nuclear power, are in focus now. With the lunar Nodes transiting Taurus and Scorpio, shared ressources and the control thereof are a collective challenge for 1 1/2 years, pointing to self sufficiency that's based on natural, sustainable ressources.
Another activation has been taking place at the same time: November's Lunar Eclipse happened on fixed star Algol. That Eclipse has been forming a tense T-square with Ukraine's Sun. Now the North Node of the Moon is transiting over this not-so-friendly star.
While the US Pluto Return is a huge topic, the EU is barely coming out of it's Saturn Return, and for the Union, the Saturn Uranus square still lingers. The collapse of communist regimen as well as nuclear energy are huge topics of this Saturn Utanus cycle.

This is a simplified discription of the backdrop against which Ukraine has been violated.
The chart for February, 24th 2022, 05:00 local time Kiev, Ukraine, shows a Bowl containing the eastern hemisphere, which is a symbolic language all of it's own. The Lunar Nodes are lined up with the IC/MC axis, with Algol close to the IC. Another Eclipse will activate this axis in May. The Moon (exactly conjunct Asteroid Lucifer) is in a closing semisquare to Mars. The upcoming New Moon is an opening semisquare to the eruptive Venus Mars Pluto conjunction. This is an aspect that makes a release of tension inevitable, one way or the other.
In the chart of the attack, we are seeing a last quarter Moon. May this be an indication that this is not the start of a successful, longstandig operation. 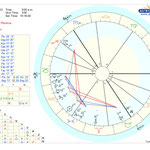 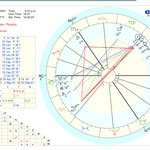 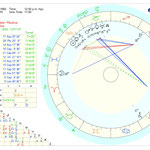 The Chart of the Tschernobyl incident

Things are pretty intense now:
The Jupiter cazimi on Saturday after the Pisces New Moon is the Jupiter Return of the Tschernobyl incident!
The South Node of the Moon closing in on the Moon of that chart.
The russian attack on nuclear plant Zaporizhzhia happend with the Moon entering Aries: a reflection of the Uranus' Aries ingress in 2011?
Next, the Moon conjoins Chiron, on top of Mercury in the Tschernobyl desaster chart - while Mercury reaches the degree of the upcoming Mars Saturn conjunction in April!
The Mars Saturn conjunction in the beginning of April will be square to the Nodes of the Moon - an extremely fateful signature. There will be a Grand Cross forming with P's MC Pluto.